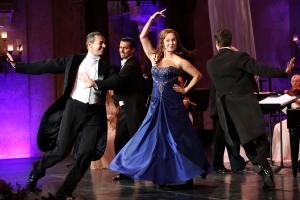 Budapest is a city that proudly wears its history and culture. With the Budapest Gala Concert, you have the chance to take a trip back to the 19th century and experience music from another time. Singers from the Budapest Operetta Theatre, backed by the Danube Symphonic Orchestra and talented local ballet dancers, promise you a wonderful journey through Hungarian music’s many periods and genres. The artists present beloved folk numbers, famous arias and duets from the heyday of operetta, as well as instrumental works by Hungarian greats such as Franz Liszt and Ferenc Erkel. Several of the evening’s performances also showcase the cimbalom, a unique and authentic folk instrument that is bound to stun you. For a night that celebrates the music and culture of Hungary, this Budapest Gala Concert has it all.

Chances are you have seen the cimbalom played by the odd street musician somewhere around Europe. However, in the talented hands of a virtuoso and in the unique atmosphere of the historic concert venues, this special Hungarian instrument truly comes to life. While it resembles a miniature grand piano’s frame, instead of keys, the player uses mallets to hit the strings. Mastering the cimbalom requires almost superhuman speed and precision and watching a classically trained musician play it is an outstanding sight. The instrument has had a pivotal role in Hungarian folk music, and the compositions in the evening’s programme demonstrate its versatility and importance beautifully.

In around 90 minutes, the Budapest Gala Concert takes place alternatively at the Danube Palace or at the Pesti Vigadó. The Palace started life in the late 19th century as a casino and gradually took on the role of a performance hall where many of Hungary’s leading composers and musicians offered sold out concerts. The Pesti Vigadó also dates back to the 1800s and was a concert venue favoured by the imperial aristocracy. Both locations retain their historic look and atmosphere that help make lasting memories. The Budapest Gala Concert thus presents a unique opportunity to taste Hungarian music and culture in an authentic setting.