The Best of Classics 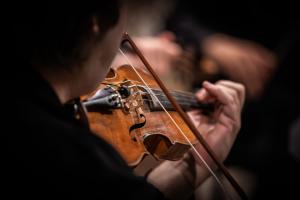 Talented Hungarian musicians and singers let gracious melodies and musical invention guide them when they put together two very special concert programmes – one for Mondays and Saturdays and the other one for Wednesdays. On any of those days, the performance is aptly titled The Best of Classics. In the varied set lists, you will find outstanding pieces of music that exemplify the Baroque and Classical periods. At the storied St Michael’s Church in central Budapest, the deeply emotional and gracious tunes spring to life and caress the ear.

With a title like this, the concert certainly creates high expectations. One glance at the programmes confirms that the talented musicians more than meet them. In the Monday / Saturday set list, Baroque’s many faces are strongly represented thanks to Handel’s ‘Water Music’, Bach’s ‘Air’ and ‘Jesus bleibet meine Freude’, Johann Pachelbel’s signature ‘Canon in D’, Tomaso Albinoni’s wistful ‘Adagio in G-minor’, Antonio Corelli’s ‘Concerto Grosso op. 6’, and excerpts from Antonio Vivaldi’s ‘The Four Seasons’, ‘Violin Concerto in A-minor’ and an instrumental version of the ‘Gloria’ oratorio, among many other favourites. In the hands of the Budapest St Michael String Orchestra, these tunes sound as marvellous as ever.

The Wednesday programme, played by an ensemble of a soprano, tenor, organ, trumpet, and violin, is just as impressive. Among many remarkable picks, Wolfgang Amadeus Mozart stands out with his ‘Church Sonata in C-Major’ and ‘Alleluja’. Felix Mendelssohn’s own ‘Organ Sonata No4 in B-flat-Major’, the gentle ‘Meditation’ from Jules Massenet’s Thais, and Franz Schubert’s ‘Ave Maria’ give the Classical period a strong representation. Next to them, Baroque gems like Vivaldi’s ‘Winter’, Bach’s ‘Gavotte’ and ‘Johannespassion’, or Cesar Franck’s ‘Panis Angelicus’ shine even brighter.

These and many other famous pieces await you in the two versions of the Best of Classics concert. The performances take place at the Baroque church of St Michael’s. Built in the early 18th century and whitewashed during Hungary’s communist period, the once-Dominican sanctuary is slowly gaining back its old glory thanks to careful renovation. Experiencing the Baroque and Classical masterpieces under its dome is pure magic.