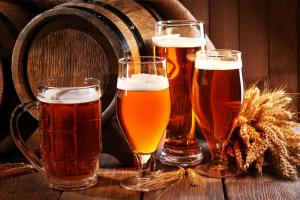 During the unique Craft Beer and Cruise in Budapest, the mesmerising Blue Danube is not the only thing that flows. Explore the stunning landmarks of the Paris of the East on a special river boat tour and let a number of artisanal beers dance on your palate. You can take your pick of a number of time slots each day, so that you can dive into Hungarian beer culture, architecture and history at the hour of your preference. The cruise takes between 90 and 120 minutes and includes a professionally curated selection of five exquisite craft beers. After you have tried all five, you can pick your favourite and take a complementary bottle of it to the boat’s panoramic deck, as tastes and visions of your special Budapest boat ride fill you.

The Craft Beer and Cruise is a special experience for every curious visitor to Budapest with a taste for brew. The beer-lover boat tour is a fairly unique concept that feels right at home in the Pearl of the Danube. Hungary’s beer culture, as your host will gladly explain to you, extends over almost two centuries, and Buda became home to the country’s pioneering commercial brewery in 1845. In the 21st century, the Hungarian craft beer scene expanded rapidly, giving rise to many of the fine and creative brews you will sample.

As you explore pale ales, dark strong porters and innovative fruit beers, do not forget to look up and take in the landmarks of Budapest. Sailing down the river that divides and binds the city’s two inseparable halves, you will see the massive House of Parliament, the impressive citadel on top of Mount Gellért, the city’s renowned six bridges, the Buda Castle, the Fishermen’s Bastion and many more signature vistas. If you opt for one of the evening cruises, you can enjoy live musical entertainment and see the city’s famous sites in their magical illumination that transforms them and amplifies their natural beauty and presence even more. Craft Beer and Cruise is a one of a kind crash course into the beautiful and fun side of Budapest!